Mykhaylo Mudryk is Arsenal’s No.1 transfer target in January, with Mikel Arteta a big fan. However, the Shakhtar Donetsk and Ukraine star is now being pursued by Premier League rivals Chelsea, with the Blues looking to turn his head..

He’s a serious player for a club that has earned the right to be taken seriously in the title race once again. And, to be clear, it’s easy to see why Mykhaylo Mudryk, 21, wants to join Arsenal.

Chelsea is loitering with purpose, as it did with a number of players last summer before losing them to rival clubs. But the deal that is still in the works involves Mudryk moving to north London for around £62 million..

Chelsea, under Roman Abramovich, would have been serious contenders for the Shakhtar winger’s signature, given the Russian’s ruthless approach to underachievement. However, Chelsea is slipping under the current ownership. This is a work in progress. A group of talented players performing well below their abilities.

Chelsea is currently a club that has lost its way.

A club that backed one manager, Thomas Tuchel, in the transfer market last summer, only to abandon him a month later and hand the players he’d signed over to Graham Potter.

Potter is obviously struggling. The squad is still not his. Injuries have exacerbated the situation. Chelsea has a lot of work to do if they want to compete in the Champions League next season.. 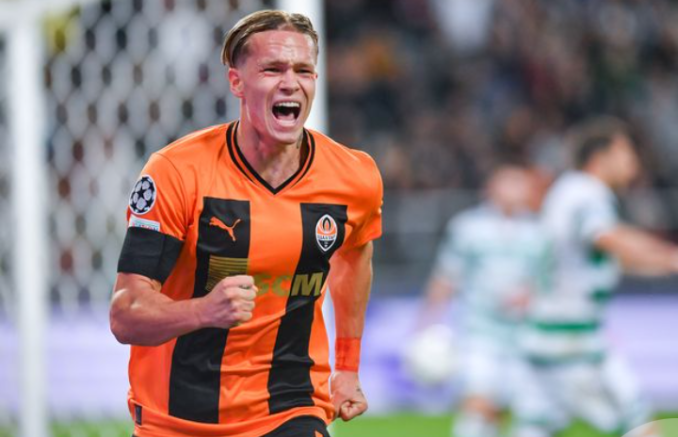 If you’re Mudryk, there’s no contest between the Blues and an Arsenal team that has only been beaten once in the Premier League this season. If you’re Mudryk, you want to compete for a spot on a team that leads the league in defensive efficiency. A team that began the season with the goal of finishing in the top four but is now far ahead of schedule, threatening to win the championship.

Despite the fact that Chelsea is interested in hijacking their deal, Arsenal can relax.

The north Londoners are the more stable club right now, having kept their heads and supported Mikel Arteta when everyone else had lost theirs over the last few years..

Arsenal’s recruitment has been excellent from start to finish. Their high-profile underachievers have been shipped out, and their large-scale investments have paid off.

Mudryk is another example. The Ukrainian would arrive in red-hot form, having scored 10 goals and provided eight assists for Shakhtar this season, with five of his contributions coming in the Champions League. He’d bring pace, trickery, and a fortitude forged in a country where football has often taken a back seat to far more serious issues in the last 18 months or so.

With Gabriel Martinelli deployed more centrally, he could play in his preferred left-wing position. Or Arteta could be more patient with Mudryk and limit him to being an impact substitute in preparation for a more aggressive campaign next season..

In any case, it’s easy to see why the player only wants to play for Arsenal. After nearly two decades in the title wilderness, they are back in business and ready to flex in both the transfer market and the league..

Chelsea move for Marcus Thuram as their new number nine

Who Chelsea need to buy next after Enzo Fernandez