Erik ten Hag lauded a Manchester United winger. He used the word “unstoppable” to describe his speed and dribbling. Ten Hag can be a harsh taskmaster, but he praised the team’s performance. He wasn’t referring to his own biggest purchase..

Rashford has emerged as the dominant figure in a forward line devoid of Cristiano Ronaldo..

Ten Hag rarely hides his desire to sign another striker, despite the obvious focus on Anthony Martial. Antony, the 13th most expensive footballer in history, is an oddly overshadowed figure.

His goal was his first in 12 weeks, despite the fact that six of them were occupied by the World Cup, and his tournament was disappointing. The £85 million man spent most of it on the bench for Brazil, interspersed with forgettable cameos. He missed United’s final five games before the World Cup due to injury, but he had already begun to lose steam. He has yet to reclaim it.

He has been the polar opposite of United’s other major signings, making both the best and worst first impressions..

When he scored in style against Arsenal on his debut, the exorbitant fee seemed less of a burden and more of an inspiration.

He was the first player in Premier League history to score in each of his first three appearances for United, whereas Casemiro started on the bench while Scott McTominay started, Christian Eriksen’s debut was a false nine in defeat, and Lisandro Martinez’s height was an issue after the 4-0 thrashing at Brentford. Each is now regarded as an excellent piece of recruitment. Antony might not; at least not yet.

Last week, Bournemouth’s left-sided attacker seemed to be mocking United’s £160 million pair of wingers as he fired a series of shots at the United goal..

Jaidon Anthony was posing a greater threat at Old Trafford than either Jadon [Sancho] or Antony had in a long time.

The arrival of the Brazilian has had an impact. Ten Hag’s strike budget is likely to be limited to loans in January due to United’s overspending in the summer. That, in turn, is a result of paying arguably twice Antony’s actual value, or twice what Liverpool paid to sign Cody Gakpo, a forward Ten Hag admires.

A major concern from the start has been that he is too one-footed and one-dimensional, constantly cutting inside on to his left foot to shoot, like Arjen Robben in slow motion, but lacking the Dutchman’s dynamism..

His goal against Everton was scored with his right foot; it was also an open goal from about two yards. Otherwise, his shots can be frequent but also predictable.

Ten Hag’s training focuses on improving various players’ weaker feet; given how rarely Antony uses his right foot, he has more room for improvement than most. On Friday, there was an illustrative moment: Antony escaping into space, only to be pursued by the faster Amadou Onana and, with the inevitability that he would have to cut infield sooner or later. The move was unsuccessful..

In some ways, this was typical. United’s three goals came from moves down the left flank, twice involving Rashford’s crosses. While Antony has played less than half the minutes, United have the highest share of their attacks on the left (42 percent) and the lowest on the right (31 percent). It suggests that his goal against Everton – a left-wing cross finished by the right winger at the far post – was the type he should get more often; instead, it was his first from a cross from the opposite flank.. 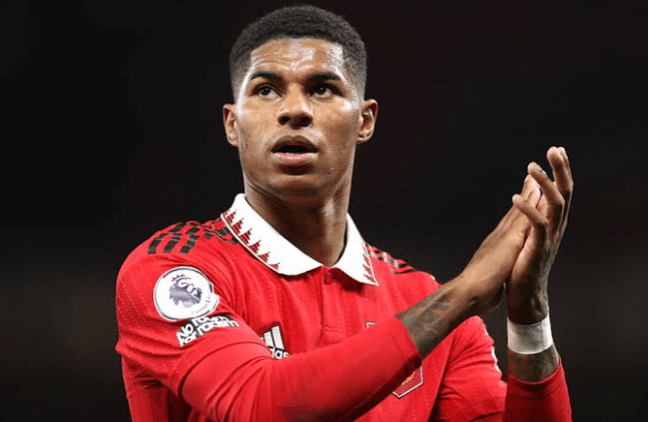 Many of United’s attacks go through Rashford, who appears to be becoming increasingly reliant on him. “I’m not worried that only Marcus Rashford scores goals,” Ten Hag responded..

I am also convinced that other players, such as Anthony Martial, Antony, and Bruno Fernandes, are capable of scoring goals.”

Antony’s best season return is 12, but that is not the most concerning statistic. “As a striker, you measure goals and assists, and today he had two assists and one goal,” Ten Hag said of Rashford. It was unintentionally damning of Antony, who has yet to record an assist since his days at Ajax. He has made so few Premier League chances that his expected assist total is half that of Aaron Wan-Bissaka, a defensive right-back who had only played four minutes before Christmas. In terms of expected assists per 90 minutes, he ranks 17th on the United team..

More assists have been recorded by Alisson and Ederson than by the £85 million winger. “I really demand a lot from myself, regardless of what people say about me,” Antony told TNT Sports, implying that he is looking for more creativity. His former Ajax manager, presumably, will as well.

Weghorst and five transfers that could happen this week