Liverpool’s Andrew Robertson claims that Jurgen Klopp’s squad has discussed their lack of consistency. However, he believes that for every step forward, they take one back after facing Brentford..

On Monday, the Reds were defeated 3-1 by the Bees, who took advantage of a number of defensive errors to claim a well-deserved victory. Liverpool’s defeat in west London also meant they couldn’t close in on the top four spots in the Premier League table despite having played one more game.

Liverpool are in fifth place, two points behind Manchester United, who have a game in hand. Arsenal now have a 13-point advantage over the Merseysiders. While Newcastle United, like the Reds, have played 17 games, they are four points ahead..

Brentford handed Liverpool their fifth defeat of the season in the Reds’ 17th game of the season. Over the last four seasons, they have only lost more than five games in a single term once. Klopp’s team lost nine games and finished third in 2020/21.

Ibrahima Konate gave Brentford the lead in Liverpool’s visit to London on Monday. In the 19th minute, the centre-half inadvertently turned the ball past Alisson and into his own net from a corner. Later on, Bryan Mbeumo also brushed aside the Frenchman far too easily.

After Harvey Elliott turned over the ball while attempting a dummy, Yoane Wissa (42′) doubled the Bees’ lead before the break..

After Alex Oxlade-Chamberlain (50′) had responded, Mbeumo (84′) ended the Reds’ chances of a comeback by beating Konate to the ball and striking.. 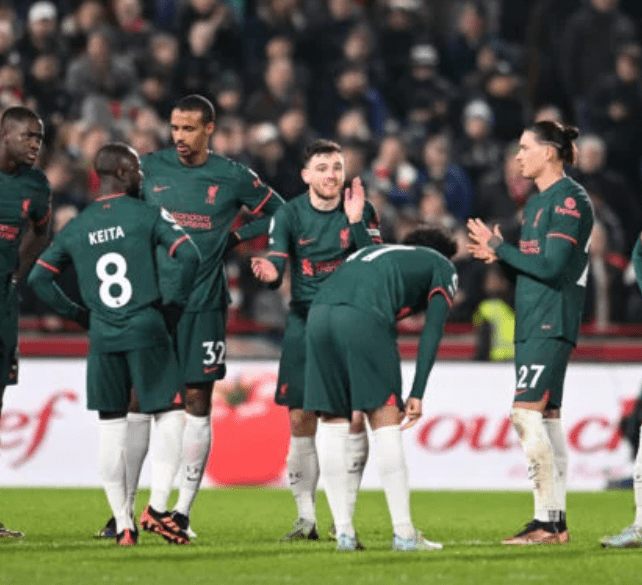 Oxlade-Chamberlain scored immediately after Klopp made three substitutions at halftime. As Liverpool looked for a way back at Brentford, he brought Robertson on alongside Naby Keita and Joel Matip. Elliott, Konstantinos Tsimikas, and (due to injury) Virgil van Dijk all made way.

Alisson did well to limit Brentford to one goal, while Liverpool’s defenders failed to protect his goal. However, the Reds were also reliant on VAR to keep them in the game after Wissa had another effort ruled out. When Wissa shot, Ben Mee was in an offside position..

Brentford had scored all three of their goals against Liverpool that the VAR had ruled out at set pieces. During the first half, Robertson could only watch his teammates struggle from the bench. Nonetheless, it provided him with a clear picture of where Klopp’s squad needs to improve.

We’ve talked about consistency and other things, but we’re not getting it,” Robertson told BBC Sport. “It feels like we’re [taking] one step forward and one step back at the moment, which makes it hard to climb the league table, unfortunately..

“First half, we were second to every ball, no real runs in behind,” he added.

We needed to be first to the ball in the box, more aggressive in our own box, and prevent corners in the first place, which we didn’t do.

“That performance [against Leicester City] should have been a kick up the backside where we say: ‘Right, we’ve won but now we need to put in a better performance’. We had another poor performance three days later. It comes down to consistency, which we must achieve..

How much have Chelsea spent in the January transfer window?