Jamie Carragher has slammed Liverpool’s defending after they conceded two goals in the first half against Brentford in the Premier League..

The home side took the lead in the 39th minute after bundling in a corner, with Ibrahim Konate getting the final touch as the reds struggled to deal with Brentford’s aggression. Before the break, Yoane Wissa doubled the lead with an excellent header that Allison couldn’t quite claw out.

They’ve given themselves far too much to do. Liverpool has struggled all season against high-intensity, aggressive teams. It appears to be the end of an aging team, and it was a disaster.

Liverpool, he said, were “not at the races” against an energetic and well-supported Brentford.

The first half, according to Gary Neville, was yet another example of Liverpool’s poor defending this season. ‘Sometimes you look at a team taking a corner and it just looks dangerous, and they all miss it,’ he said. With all those players at the near post, it appeared dangerous.

‘It had seemed so easy for [Liverpool] at the back in recent years, but gaps are now opening up..

We’ve been watching this high line for five years and it’s been fantastic, but it’s happening far too often now, and Jurgen Klopp may be changing his mind.. 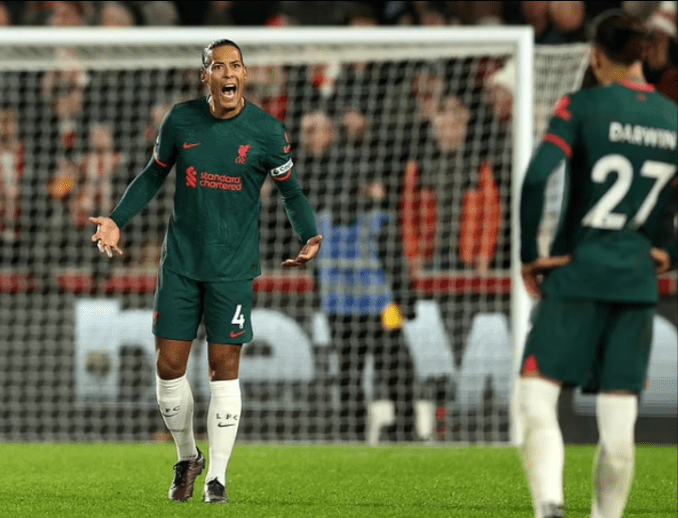 Klopp’s side has now conceded in each of their last eight Premier League games, and their chances of qualifying for the Champions League are hanging by a thread.

‘Liverpool held that ridiculously high line, and Brentford exploited it,’ said Micah Richards at half time. There is no structure. Nobody knows what they’re up to. Liverpool has taken me by surprise; there has been no concentration.

Liverpool did score one goal after halftime to make it 2-1, but they will need to improve significantly to force a result in West London..