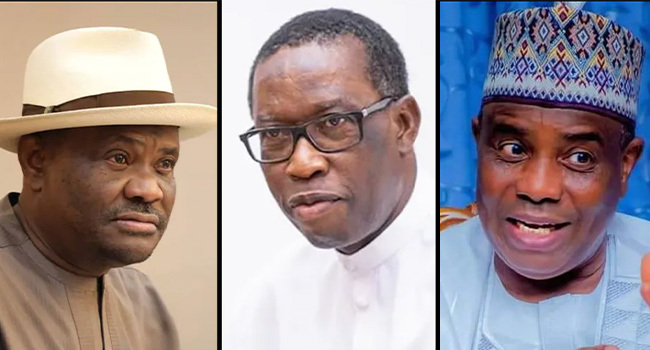 Governor Nyesom Wike of Rivers State has given a veiled response over comments made by Sokoto State Governor, Aminu Tambuwal; and his Delta State counterpart, Ifeanyi Okowa against his G-5 group.

G-5 is a group of aggrieved governors within the Peoples Democratic Party.

Reacting on Saturday, Wike said God won’t give power to the “wicked” and those who will sell off Nigeria in a fraction of a second.

“We can never play God because we know the role that God has played in our lives,” the governor said when he flagged off the construction of Ogbo-Ihugbogbo Road in the Ahoada East Local Government Area of the state, according to Channels Television.

“Don’t be treacherous because you want power…God will never give power to the wicked,” Wike said.

Okowa, who is the running mate to the 2023 presidential candidate of the Peoples Democratic Party (PDP), Atiku Abubakar, had a rally in Delta on Friday, said God will give power to the party at the poll next year and nobody including the G5 can change that.

The G5 has been at loggerheads with Atiku after the party’s presidential primary in May and has asked for the resignation of PDP National Chairman, Iyorchia Ayu for a southern replacement as a precondition to support Atiku’s decade-long ambition.

Wike, in his reaction to Okowa’s comments, said the G5 has the backing of God and that explains why the group continues to wax stronger.

“Some people said it is only God that will decide who will be president and not G5…We are where we are because of God, nobody can even breathe air, if not God, not to talk about holding position,” the governor said on Saturday.

“Our prayer is: God, don’t allow those who will betray their brother when they have agreed with their brother to do something. God, may You never allow such persons and that is why God is still making G5 to be stronger.”

Wike said though those in Atiku’s camp desired a division to cause the split of the G5 it has never worked.

The governor also said statements like the one credited to Tambuwal infuriates him. “Somebody said they will handle us when we decide. These are the things that annoy us,” he said.

Tambuwal, who is also the Director General of the Atiku/Okowa presidential campaign organisation, had on Friday, said the PDP will tackle the G5 when the group makes its position on its preferred presidential candidate known in January.

Wike and his allies were reported to have met the presidential candidate of the All Progressives Congress (APC), Bola Tinubu in London on Thursday on a possible deal but no agreement seemed to have been reached.

While Wike and his allies have not been seen to campaign for Atiku, it is not clear whether they will support Obi, Kwankwaso or Tinubu in the contest for Aso Rock’s top job.

Paul Merson Issues A Warning To Chelsea, Arsenal, And Manchester United Regarding The Transfer Of Joao Felix